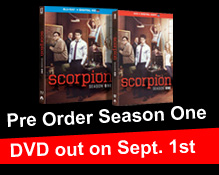 Before the premiere of Season Two, catch up with the team by re-watching Season One-out on DVD September 1st. You can pre order on Amazon or at the CBS Store. For more information on the DVD Features, click here.

Can’t wait for September 1st? You can rewatch Season One right now on CBS All Access or you can purchase Season One of Scorpion on iTunes.

Check out the following rebroadcasts of Scorpion on CBS.

“Once Bitten, Twice Die” – When a conflict in Eastern Europe threatens to escalate, Team Scorpion is called on to help facilitate secret peace talks to prevent World War III, on a rebroadcast of SCORPION, on a special night and time, Saturday, August 22 (8:00-9:00 PM, ET/PT) on the CBS Television Network. (Originally broadcast 3/9/15.)

“Young Hearts Spark Fire” – While on a mission to save lost hikers, Team Scorpion’s helicopter crashes, igniting a massive wildfire that quickly closes in on them. Also, Sylvester must help their injured pilot who is unable to make it to safer ground, on a rebroadcast of SCORPION, Monday, August 24 (9:00-9:59 PM, ET/PT) on the CBS Television Network. (Originally broadcast 3/23/15.)

“Love Boat” – Team Scorpion goes undercover on a cruise ship to locate and disable deadly stolen rockets. Meanwhile, as Valentine’s Day approaches, Toby and Happy help Ralph, who is in the throes of his first crush, on a rebroadcast of SCORPION, Monday, August 31 (9:00-9:59 PM, ET/PT) on the CBS Television Network. (Originally broadcast 2/9/15.)

“Rogue Element” – Team Scorpion must help protect Cabe’s ex-wife after she uncovers evidence that suggests foul play in the death of a prominent congressman, on a rebroadcast of SCORPION, at a special time, Monday, Sept. 7 (11:35 PM-12:37 AM, ET/PT), on the CBS Television Network. Jessica Tuck guest stars as Cabe’s ex-wife. (Originally broadcast 11/17/14.)

“Cliffhanger” –Walter finally learns Cabe’s long-kept secret regarding the Baghdad mission, and it threatens to tear Team Scorpion apart forever. Also, Paige’s world is rocked when Ralph puts his life in danger to help the team, on a rebroadcast of SCORPION, Monday, Sept. 7 (9:00-9:59 PM, ET/PT) on the CBS Television Network. (Originally broadcast 4/13/15.)

SOCIAL MEDIA
What is your favorite episode from Season One of Scorpion?News
To celebrate Season 2 I am counting down with the 22 episodes of Season One.News